Yosemite National Park is a majestic land rich in climbing history, a long Native American presence and marked as the birthplace of modern highlining as we know it today. For a long time it’s been preserved as a sacred place of grandeur and natural beauty, dominated by an abundance of extraordinary waterfalls, diverse wildlife and gigantic granite walls that erupt from the valley floor reaching for the heavens. Without a doubt, these glacial polished amphitheaters beckon to every rock climber and adventure seeker to test their courage and strength on the towering white rock above. Attempting to capture the scale and impressive qualities of El Cap (short for “The Captain”) and the rest of Yosemite’s environments is hard to convey in words, but the feeling and perspective of seeing the larger than life white cliffs for the first time will leave any visitor with a lingering sense of awe remembered for a lifetime. As millions of tourists flood into the park every year, the scene at Camp 4 and around Curry Village can leave the outdoorsman with a sense of claustrophobia and unease, but luckily the backcountry is only a short backpacking distance away. There the hustle and bustle of millions of tourons (common nomenclature for “tourists” and “morons”) can be avoided if you have a solid set of hiking legs. Leaving the crowds behind, along with the many domesticated Yogi bears trying to steal your PB&J sandwiches, is where true adventure can be found. 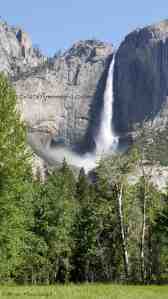 I’ve been frequenting different parts of Yosemite for the past 5 years, and it was during my first visit to the park when a new passion was sparked and my worldview was absolutely shaken. I think back at my first experiences looking up at Yosemite Falls as a significant catalyst in my life. It profoundly altered the creation of all future chapters in my path from henceforth. It’s sometimes difficult to define the moment, or origin, of such an impacting life change, but seeing Yosemite Falls from below (towering some 3,000 feet above the Valley floor) left me with a yearning for adventure which I couldn’t resist. Experiencing the powerful roar of the waterfalls near its base, while dumbfounded by the sight of humans casually walking above its crest on a piece of one-inch webbing, I was inspired and intrigued. I felt a pull, drive and desire to suddenly experience that sort of freedom for myself.

My previous year of life had been defined by a nomadic migration living out of my car with an irresistible obsession for rock climbing. After being introduced to ropes and technical climbing in college, while constantly watching films of young men and women traveling the world with a singular obession of going up, I was inspired to follow in their footsteps. Unlike many university graduates who haphazardly question their post-school life, I knew exactly what I wanted and more importantly I knew how to get there. Since discovering my vertical passion I started taking summer college courses and studying constantly to graduate from the University of Oregon as fast as possible. The moment I turned in my last homework assignment was the day I left my old structured life behind, with no regrets. I opted out of walking at graduation, not caring that I had finished in the top 1% of my class in the Romance Language department. I reorganized my life into a small Honda Element vehicle, with a custom sized bed in the back, to see the world from new heights. My journeys led me from one climbing destination to the next, beginning in Squamish, Canada, and heading south along the west-coast corridor to many world-class climbing meccas. I touched many cliffs and boulders around Smith Rock, Bishop, South Lake Tahoe, Yosemite, Joshua Tree and other pocketed areas in new terrain. I simply followed the seasons chasing good weather and eventually ended up moving east toward Hueco Tanks State Park in Texas and then Flagstaff, Arizona. The year had been phenomenal and I had progressed from bouldering at a beginners level to sending V10 in some of the best climbing destinations in the country. My sport climbing abilities saw a spike in technical improvement, my gear placements were improving and my strength to weight ratio was exponentially on an upward trend, until IT happened…

Injury set in. I was bouldering in Arizona and heard the dreaded heart breaking sound that plagues the minds of active climbers. SNAP went the pulley in my middle finger, the swelling commenced quickly and tears seeped from my eyes near the base of the boulder. For the average person working a 9-5, this is not a common injury, but for climbers who put extreme amounts of physical strain on their fragile fingers, it’s unfortunately a relatively common occurrence. For a “dirtbag climber” living and breathing to to play on rocks, this can be a serious time of change and potential depression. After realizing I wouldn’t be climbing hard for at least another 6 months to year, I had to make new life decisions. Like all events which appear both tragic and liberating, there was a lesson to be learned here and life would go on. My path of simple living and obsessively dreaming about the next route had to shift in a new direction. 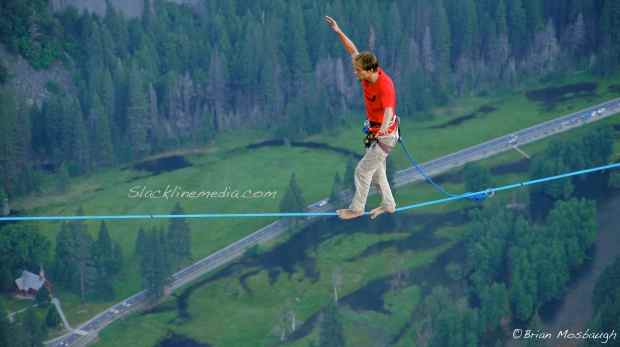 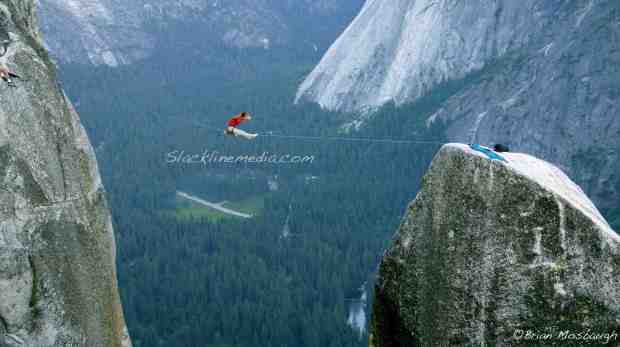 Shortly afterward, I found myself backpacking for a week into the depths of the Grand where I hoped to find answers to new life questions. After some healthy introspection in the depths of the desert paradise, I decided to go back to Yosemite National Park. Shortly after arriving in the Valley I headed toward Yosemite Falls, I looked up and saw the most beautiful highline in the world being walked with total grace by Jerry Miszewski. In my previous climbing experiences I had already started casually slacklining in parks around Eugene, Oregon. It was around that same time when I was introduced to rock climbing outdoors at Smith Rock State Park, treating slacklining as a common rest day activity from the routine of cranking down on rock and torturing my tendons. By chance, I had also rigged and walked the classic Monkey Face Highline at Smith Rock after six-months of slackline practice. It was an incredible new challenge to my balance but the thrill wasn’t strong enough to supercede my climbing goals. I was absolutely terrified from the exposure below my body and was shaken by the mental focus needed to walk in balance on a highline back in Oregon, but the level of Jedi focus these highliners possessed dancing 3,000 feet above the Valley floor was on another level. 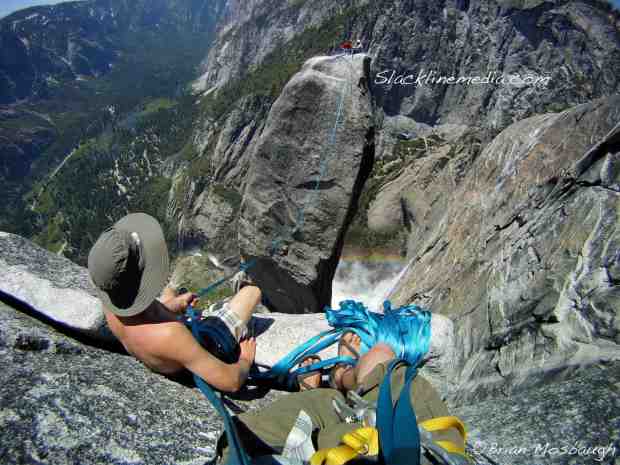 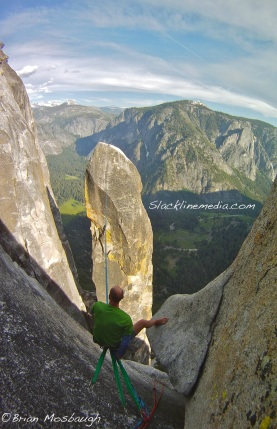 With my finger severely injured and the reality of long recovery seeping in, I needed to find another way to keep my brain stimulated, my body moving and my soul happy. I decided then and there, at the base of the grandiose Yosemite Falls, that highlining would become my new life focus. Since that day, I’ve relentlessly decided to follow a path of global exploration, guided by my inner intuitions and balanced passion pursuits. It was inevitable that I would eventually buy a camera and attempt to capture this unique space, and so continues the constant challenge of finding the right angle and image to capture my heroes living awesome in nature. The act of rigging a highline and walking above the great abyss is an almost indescribable sensation. Through still imagery, filmmaking and storytelling I try my best to convey this natural beauty to the greater world. This lifestyle stimulates my senses and leads to extremely profound feelings which help define and challenge my character in a way I’ve never encountered before. Sometimes the walk on webbing is calm and meditative, while other moments its filled with fear and terror, shaking my total sanity and balance. It’s in these contrasting emotional bouts that we push our personal limitations of what is possible in the void. The slackline family which seeks out these adventurous pursuits is ironically a very grounded group, communally supportive of one another and totally blissed out collectively. My fellow highlining, climbing, BASE jumping and rigging companions are now more like a blood family to me. They understand my worldviews and meaning making of life. It is with them that I find acceptance and love.

Brian Mosbaugh taking a break on the Taft Point Highline with El Cap in the backdrop. Photo by Daniel Carrillo

Our dreams are filled with BIG goals that straddle what’s possible or impossible, and for this reason we’re pushed in new insightful directions learning something new and exciting everyday. We remain young, despite our growing grey hairs, and push forward like there is no tomorrow. The present flow of life is what matters most in this type of reality. Instead of stressing the importance of accumulating monetary wealth or collecting shiny objects, we willingly accept a simple way of life. We see the world as a living playground to cherish and take care of, knowing that it’s at greater and greater threat by our collective human impact. For this reason, we respect the wild places where we dwell, adventure and grow together. In chasing down these dreams of elevated adventure, constructing arbitary lines in space, jumping into the abyss and climbing large rocks for no apparent reason, I’m somehow reminded of my small size and become immediately humbled. I don’t exactly know why we do what we do, but a love for the outdoors and a universal feeling of being with family is what keeps me coming back for more…

I’ve included some photos and a video of a highlining trip I took to Yosemite in 2010 and 2011 to accompany these words. These images are a tribute to how inspiring Yosemite National Park is and it’s also a tribute to those that have taught me so much along the way. I want to thank Scott Balcolm for setting a new standard of adventure by walking and establishing the Lost Arrow Spire Highline back in 1984. You did the world a favor on that day. I also want to thank Jerry Miszewski, Pierre Carrillo, Eric Rasmussen, Jeremy Louis, Julien Desforges, Hayley Ashburn, Russ Phetteplace, Damian Cooksey, Emily Sukiennik, Jan Galek, Faith Dickey, Jordan Tybon, Damian Czermak, Mical Korniewicz, Andy Lewis and SO MANY others who not only inspired me to find greater balance in my life as I was learning to walk a slackline but who also shared with me their wealth of knowledge in rigging and living gracefully against the grain of modern expectations. I hope these words and images will have somehow inspired others to follow their own dreams with passion. May everyone continue to inspire and be inspired!