Line of the Lost 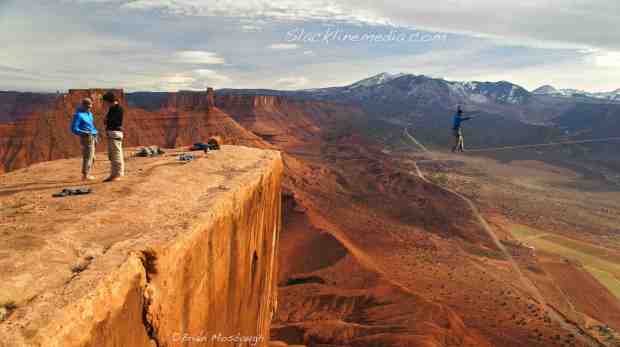 The life of a Moab highliner often involves a lot of wandering in the desert and traveling over rugged and rocky terrain via 4 wheel-drive vehicles. The approaches are typically pretty short but for this most recent project the hike was half the battle while the driving portion meandered casually along nice asphalt for once. The trip from Moab passes through a pleasant corridor of rock cliffs alongside the Colorado River eventually leading into Castle Valley, providing a refreshing scenery of mountains, rock towers and scattered mesas with infinite highline potential all around. As the snowy peaks of the La Salle Mountains begin to show signs of accumulating snow caps, the temperatures are beginning to cool as winter nears and projects continue to rage onward and upward. After an hour of hiking alongside steep scree slopes, across cliffs with fixed lines (known as a “via ferrata”) and eventually up vertical ropes leading through chimneys of rock you arrive atop the playing field. Parriott Mesa is the ballpark which stands out as an incredible highline location with vistas and exposure hard to beat anywhere in the world. It was during this last summer that Hayley Ashburn, Andy Lewis and Scott Rogers established the first highline here, a beautiful line appropriately named “Rim with a View,” as it showcases the La Salle Mountains in the distance, quaint farm fields below, multiple desert towers nearby and the infamous Fisher Towers almost out of sight. During my first trip to the top of this formation I was blown away by the natural beauty and the room for adventure it beholds. Not only is Parriott Mesa well known by rock climbers in the area for its epic pick of desert cracks leading up amazing phallic towers but it’s also the site of many BASE jumping exits. In fact, it’s currently one of the few destinations where local BASE jumping professional, Mario Richard, has established a business of tandem BASE jumping! 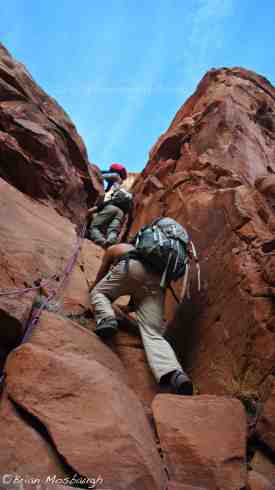 Upon getting to the summit of the mesa with heavy packs and friends Richard Webb, Ethan Holt, and Ryan Matson (accompanied by our canine friend Big Fuzz, who patiently waited below) we were all psyched to get our rig on and start walking amidst this stunning landscape. As we finished tensioning the line and putting on harnesses I was both excited to walk the line and capture some incredible images of my friends being bad ass. The rig was ultimately walked by all of us with many smiles and a bright sun in our face for the majority of the day. Photographing highlines in this condition can often be a difficult task if you don’t get the right light or angle from the sun, but that days mission provided ample opportunities to snap off some amazing shots. Luckily for me, with the remaining rope from our pulley set-up, I was able to rappel down the cliff a short ways to access a small ledge and get a new angle on the line. Below are some photos which demonstrate the beauty of Utah’s desert, mountains and local monkeys. 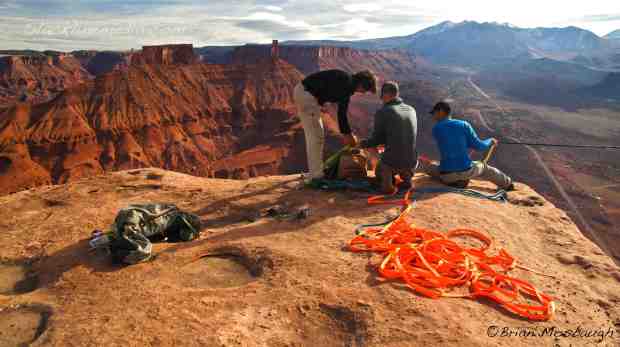 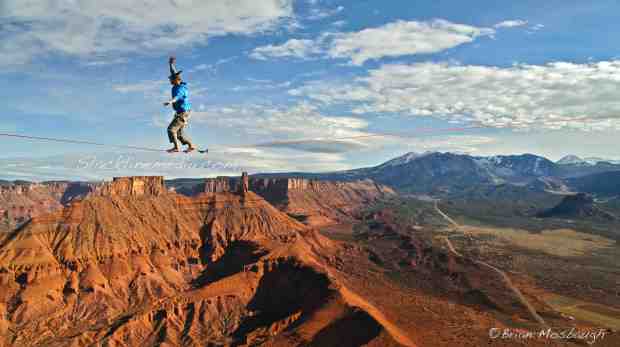 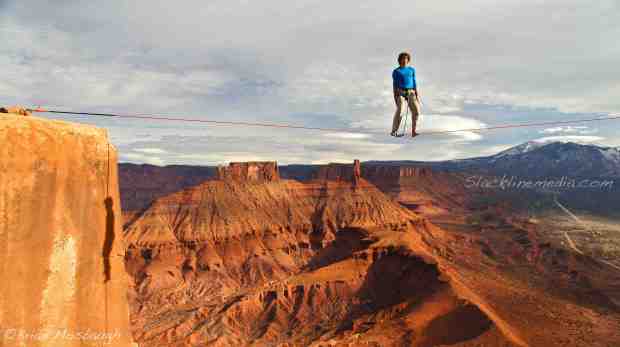 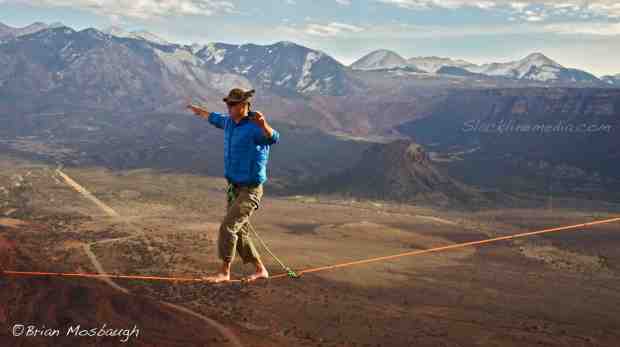 After spending the day walking “Rim with a View” it appeared obvious that many new highlines could be established atop this formation. What caught our eye most was a longer version of the line we were walking, which extended out to a more exposed prow that jutted into greater space, offering dizzying views and exposure. So with our minds made up to come back soon and excitement coursing through our veins, we charged the drill battery that night and prepared for the next day’s adventure. Following the same slog path and 1,500 plus feet of climb to the summit, we returned with heavier packs and anticipation for a new highline. It turned out that only Ethan and I were able to come back a couple days later after waiting out some rain. With our psyche high and legs well rested we had enough energy to get the job done and install a new addition to the growing resume of Moab highlines. The new project, to be named “Line of the Lost” (since the terrain vividly reminded us of what Land of the Lost would look like) was a great success. Measuring in at about 140′ long with approximately 400′ of direct exposure beneath, and another many 1,000′ of visible dizzying drop, we were psyched to put another notch on the belt of projects conquered. Both Ethan and I were first to walk the line, Ethan getting the send in one direction and myself walking it full-man and on my first attempts on-sight. This is one of many desert adventures which Ethan and I have embarked on and it never gets old sharing such unique experiences with best of friends. I feel honored and blessed to be surrounded by such motivated people in my life…

This is of course not the last or longest line to be established atop Parriott Mesa. On the same day as walking “Line of the Lost” Ethan and I installed anchors for another highline along a different aspect of the mesa. The new project looks to be around 200′ long, with amazing exposure beneath and the potential for a swingline if people were so inclined to help carry more ropes to the summit. So with that being said, life continues on here in Moab with many promises of adventure ahead and countless more towers to climb and span. 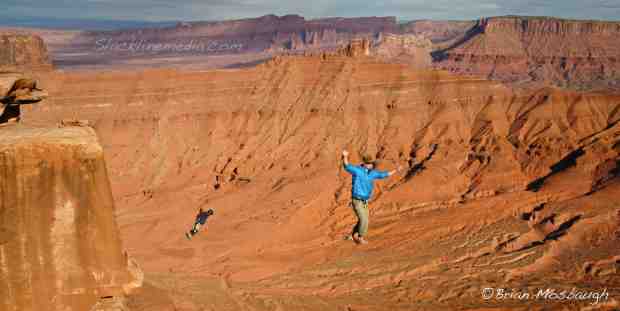 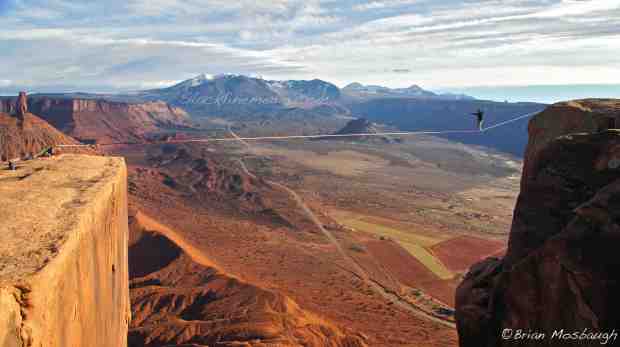 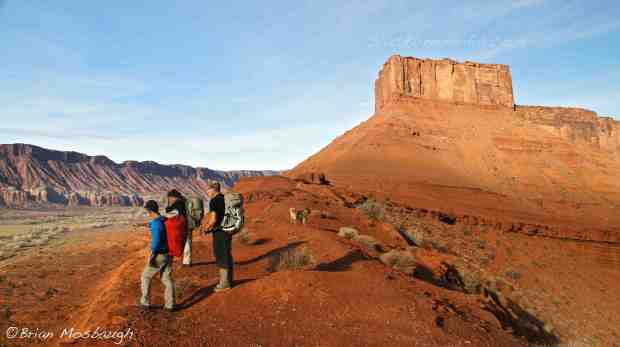 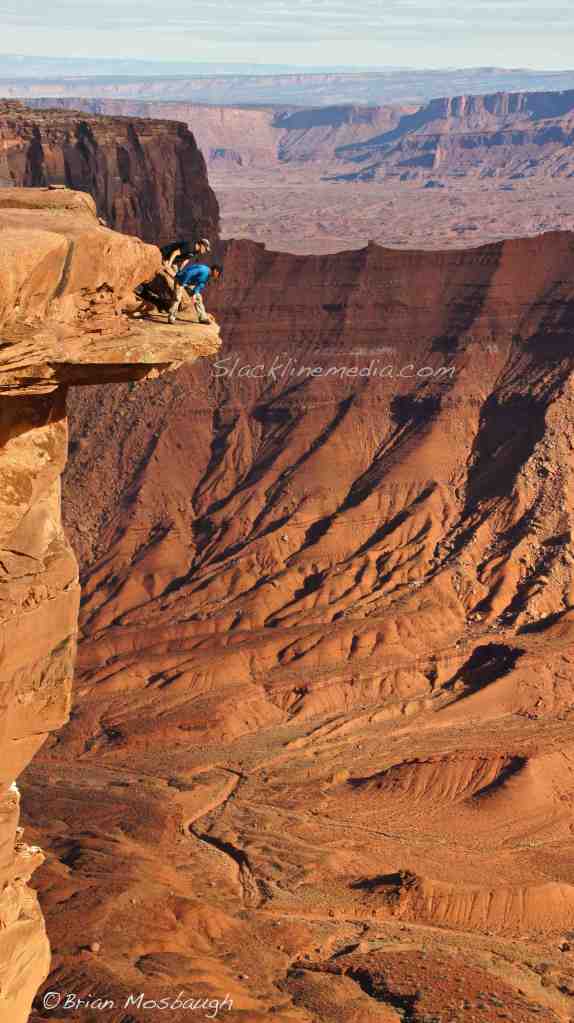 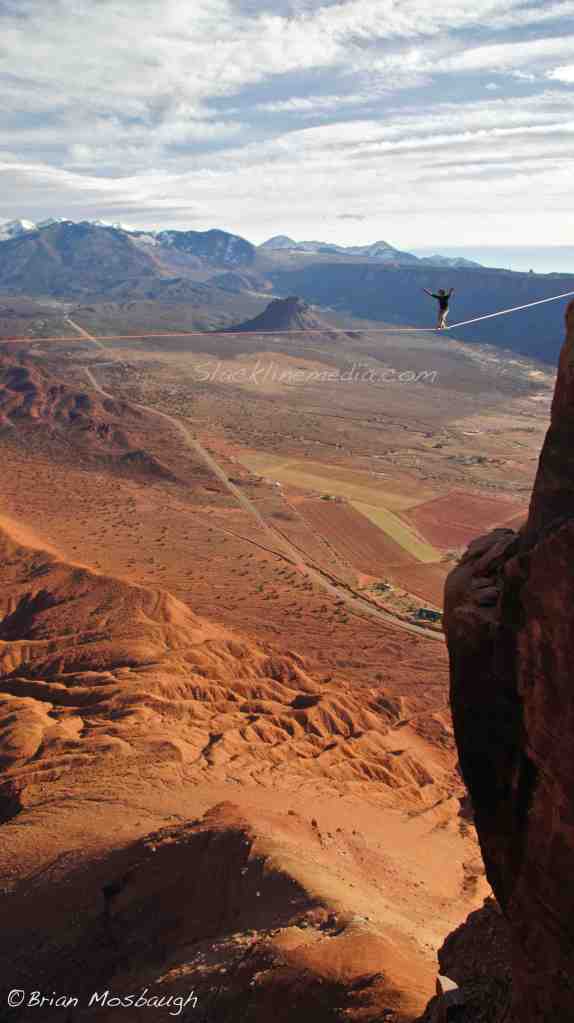 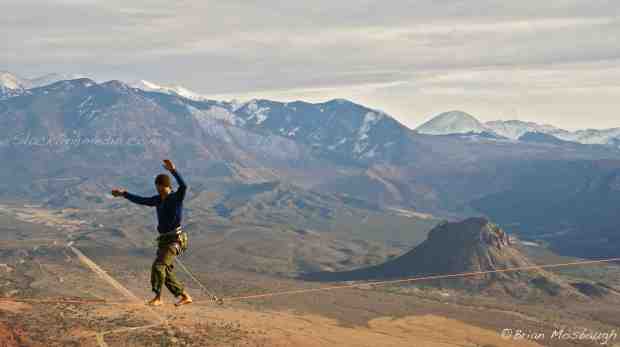 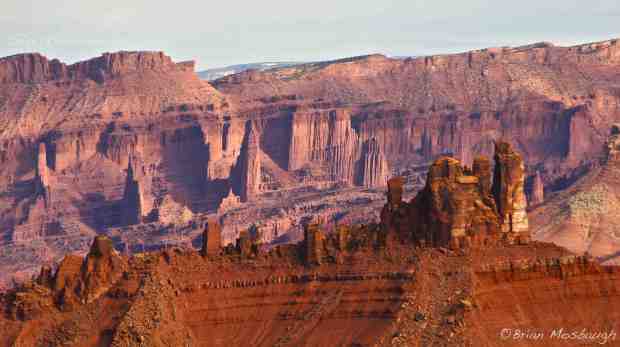 From: Highline, Highline Projects, Uncategorized
← Call of the Abyss
The Floatline →
No comments yet