Life on the Line

Over the past many years I’ve been fortunate enough to live a simple life of travel and balance, meeting amazing people along the way and accumulating a massive collection of video footage and photographs. I try my best to publish and share these documented moments with everyone but the reality is I mostly prefer spending my time outside creating new memories rather than sitting in front of a computer processing hours of footage and crunching away on long stints of editing. I like to think that in modern times I’ve found a delicate balance between these two experiences, which has allowed me to support a life of continuous adventure, but not too long ago I was only living out of my car devoted to the outdoors more than any other thing in life. Which brings me to my meeting with a friend named Jon Lang back in Oregon, whom a couple years ago approached me with an interest to edit some of my archival footage to use in a college assignment back at Oregon State University. We started hanging out together and began bouncing ideas back and forth about starting a production company and how we could go about getting a bit more professional with our documenting habits and obsession, but to summarize a long story short, we eventually went our separate ways as Jon was pursuing a career in the free skiing world and I moved out to Moab, Utah where my life became sculpted by the awesome community and sandstone cliffs that I now interact with everyday.

The video above is comprised of my collected archival footage from an expedition to Thailand with the Moab Monkeys, highlines in Joshua Tree/Moab/Yosemite, along with some additional video footage Jon compiled of the first annual Smith Rock Highline Gathering I organized and the many deep water solo lines I developed in central Oregon with the help of many rad friends. Looking back on all these memories always makes me smile and reminds me of the footprints I’ve left behind and gets me excited for the new adventures to come. There’s been so much progression in the sport of slacklining over the years that it’s obvious the passion and pursuit of balance will always see leaps and bounds as long as this passionate community continues to devote their lives to its obsession and progression. Jerry Miszewski has been a huge influence in the community, pushing the limits of length, endurance and innovation with the sport while Andy Lewis has been exposing the world to his ‘slacklife’ philosophy with his many crazy shenanigans, world traveling pursuits and awesome combination of parachute sports alongside a one inch piece of webbing. Both athletes are featured in this short video, alongside countless other individuals who have also spearheaded the progression of slacklining in so many other ways. Much of this footage has been locked away with my collection of hard drives and has yet to be seen by the public until now. So, sit back and enjoy this fast paced edit created by Jon himself.

In closing, I just want to say that it’s been an honor sharing these smiling moments of balance in nature with so many talented artists and I look forward to the new friendships and adventures that wait on the horizon. Until that next line is established or plane ticket purchased, slackers keep up the high life and stoke of balanced progression. The world really is watching and we’re just having a good ol’ time cultivating a happy life of smiles, vertical challenges and real adventure with our closest friends and heroes. What a time to be had!

Climbing is without a doubt an essential part of highlining, BASE jumping or playing in the mountains. One of the primary challenges with all these pursuits is accessing hard to reach environments where we can challenge ourselves, and for some athletes the climb is both the means and the end. In this post, I’d like to examine a pair of adventure seekers who’ve found themselves maniacally devoting their energy and time to the vertical ascent in all types of environments around the world. Ranging from the alpine mountains of Patagonia to the legendary big walls of Yosemite, both Brad Gobright and Scott Bennett are elite rock climbers who are chasing their dreams on scary routes, ascending big wall classics (sometimes without ropes) and smashing speed record link ups everywhere they go.

Brad Gobright hugs tight on The Backbone (5.13a) of the Monkey.

I first met Brad many years ago, while climbing in Joshua Tree and the Sierra Nevada mountain range of California. He initially came off as your average dirtbag climber nomadically seeking out hard rock routes. His very unassuming presence, goofy personality and pastry focused diet made Brad seem a pretty average but quirky guy in this community. After spending many months trading belays and witnessing his graceful finesse on the rock, it was obvious there was something special about his gifts. Brad absolutely lives for the experience to climb on rock, he is obsessed. He also likes to climb without a rope, quite a lot actually, sometimes free-soloing several thousand feet on very technical terrain with calm and cool demeanor. Despite his young age, every move he makes reflects decades of rock climbing experience in the body of a young determined man. His confidence and skill in the vertical world make it obvious he’s been going up his whole life, which he pretty much has been since his infancy. Examining the impressive resume of climbing achievements in his short 25 years of life, and his prowess as a well rounded athlete and committed climber is inspiring beyond words. As is the case with many climbers, Brad tends to fly under the radar of mainstream publicity living out of a small hatchback Civic traversing the country and living in Yosemite to work on first ascents and big wall projects. He is driven by a fearless psyche, which I can only try to comprehend, always surrounding himself with the best climbers in the world who add to the stoke of his internal fire. 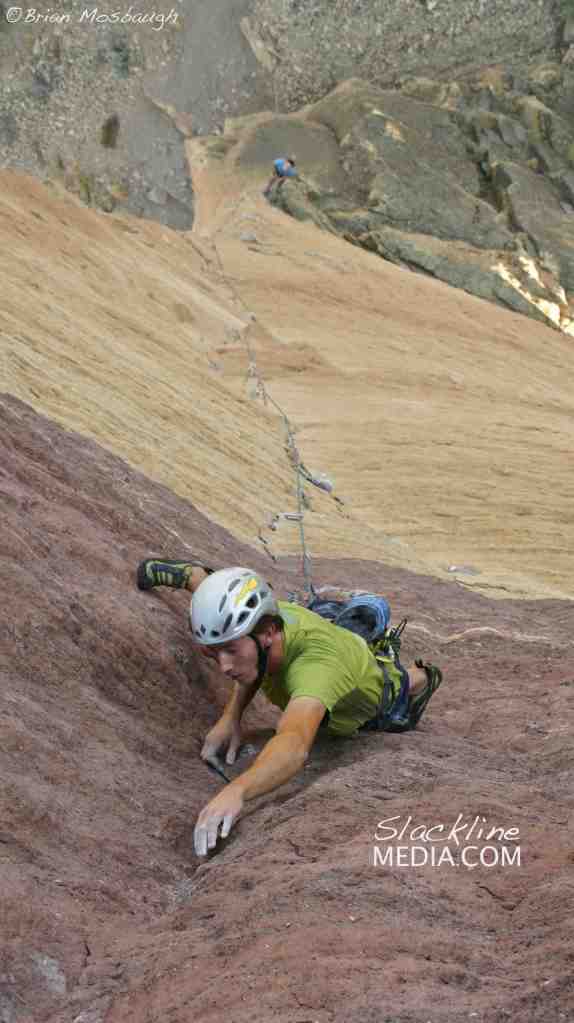 Scott Bennett with his on-sight lead on The North Face (5.12a) of the Monkey Face, a 200 foot stretcher in length.

Scott Bennett is one of his many incredible climbing partners, who also quietly boasts an adventurous and experienced background. He’s been published in climbing media for his alpine achievements and speedy ascents which all require a good set of lungs and endurance. His energy level seems to never fade or falter, sometimes going for long runs at the end of a very hard day of climbing to train. Some professional athletes appear to be either motivated by fame or fortune, but in the world of rock climbing very few ever achieve this type of recognition. The lifestyle of being a dirtbag isn’t “popular” so to speak and for that reason it attracts a certain type of person committed to their discipline for intrinsic reasons. This is why climbing remains a very pure and honest passion pursuit. Brad and Scott are an incredible duo when teamed up, fueled by shared dreams and goals of climbing longer, harder and more technical routes for the sake of improving their craft and pushing their limits. I met up with these two rock junkies back in the summer of 2011, as they were passing through Smith Rock State Park looking for hard sends to complete and new speed climbing records to shatter. Which is essentially, what they did… Both climbers, boldly on-sight free soloed the 3 amazing pitches of Zebra Zion in crisp cool summer conditions (read: very hot and undesirable temps), and got the red point sends of The Quickening 5.12d (for Scott) and The Backbone 5.13a (for Brad). Of course many other feats were accomplished, such as Brad’s new speed solo ascent of the classic Monkey Face tower (over 300 feet of vertical gain) in an impressive 3.25 minutes, without a rope. Scott also established a new mixed endurance speed record of the “Monkey to Monkey” time in just under 22 minutes. This challenge was a mixed race of running and climbing, starting on the plastic monkey boulder from the Bivouac campground and ending atop the real Monkey Face in similar fashion as Brad. After crushing dozens of other routes in the park, these two set off on their respective paths to bigger projects in Yosemite and Patagonia. Much thanks to both gentleman for allowing me to capture and witness their impressive and life long passion of ascending rock. Here is some evidence of their accomplishments.

Scott Bennett on the sharp end of The Backbone (5.13a). 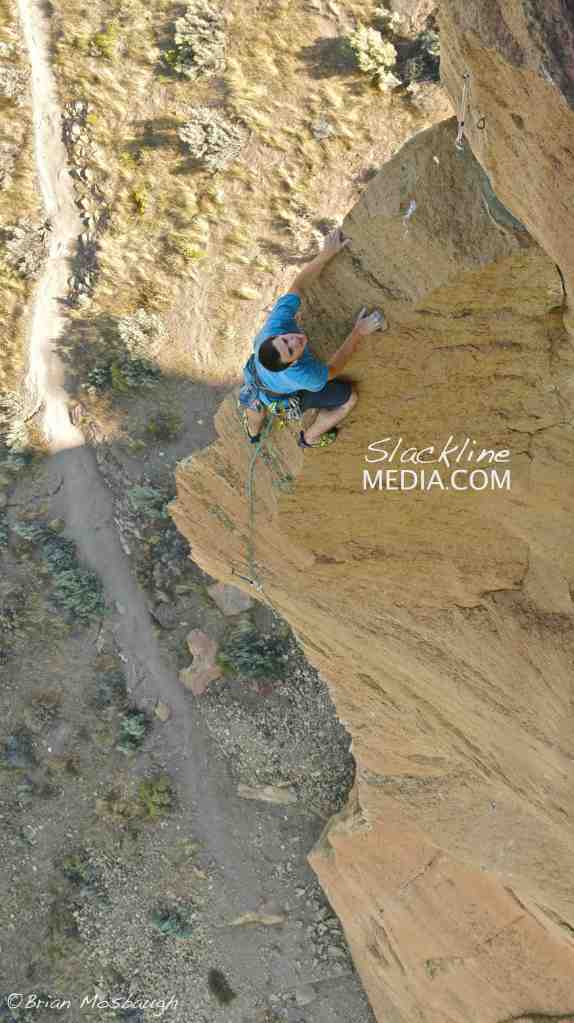 Brad Gobright nearing the top of The Backbone (5.13a).

Brad Gobright working through the long overhung moves on Aggro Monkey (5.13b).

Brad Gobright setting the new standard of speed climbing the Monkey. He was able to climb the 300 vertical feet of The Pioneers Route (without a rope) in 3.25 minutes. The time stands as the Monkey’s fastest ascent.