Posts from the ‘Joko vs klaas’ Category

In my youth, I never imagined in my wildest dreams that I would eventually be paid to build large commercial rope swings, jump out of hot air balloons with a parachute and regularly work on television productions as part of my adult career. Immediately after finishing a formal education and graduating from college, I boldly set out on an unconventional life path living out of my car, climbing mountains, walking highlines and BASE jumping all over the world. Possessed by a passion for global travel and a proclivity for immersing myself in outdoor adventure sports, I’ve pursued life the only way I know how, with total commitment and dedication to that which makes me happy and serves other people’s happiness. Working as a professional athlete, photographer/videographer, stuntman and high-angle ropes rigger over the years has provided me a unique skill set in confronting fear safely and carving out my own professional niche in the commercial industries. In the past 10 years, I’ve successfully grown a working resume doing various jobs across the hot deserts of Namibia, deep in the humid jungles of Brazil, Borneo and Thailand, above the urban madness of Bangkok and Rio de Janeiro and atop the high mountains of Nepal, Switzerland and New Zealand, among many other extreme environments. My confidence and proficiency in high risk locations has essentially become a key asset to this trade of rigging expertise, which constantly requires timely perfection, mental clarity and absolute thoroughness with clients. I’m not sure if Las Vegas, Nevada, exactly fits my definition of a pristine wilderness where I prefer to work, but the surrounding desert undeniably has its own serenity and peace far from the distracting bells and whistles of the obnoxious casino strip. 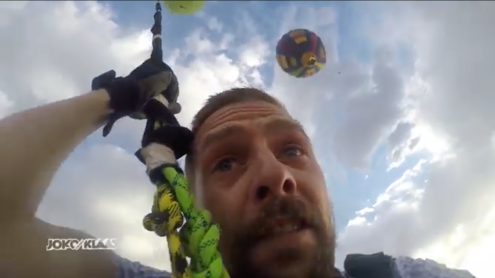 After completing a unique and challenging rigging job down in Namibia earlier this year (CLICK HERE FOR THE BIGGER STORY), working on an adventure reality television series called Global Gladiators, Scott Rogers and I received an unexpected phone call from our previous employers. They inquired if we were available during the summer to provide our unique rigging skills constructing a large human rope swing between flying hot air balloons. Having built, designed and operated many complex rope swing systems over the past decade, we got some basic details of the envisioned stunt and enthusiastically said yes. Contracted as the key riggers for yet another German program, entitled Joko vs. Klaas – Duel Around the World (or Joko gegen Klaas-Das Duell um die Welt in German), we began excitedly preparing ourselves for a hot desert job site somewhere outside Las Vegas.

The show Joko vs. Klaas, which is hugely popular in Europe, is a travel game/reality television program (running since 2012) which showcases celebrity hosts, Joachim ‘Joko’ Winterscheidt and Klaas Heufer-Umlauf, as they challenge one another to endure a slew of outrageous and mentally challenging obstacles all over the globe. Imagine a Jack Ass meets Fear Factor competition amongst daring friends with a big budget. Examples of their creative madness include them literally being duct taped to the side of a skyscraper (hundred of feet above the city of Bangkok) while singing karaoke, being placed in the middle of a room (wearing bomb squad grade protection equipment) as its literally blown up with explosives, collecting hallucinogenic honey in Nepal (from active bee hives on the sides of exposed cliffs) dangling from hemp made ladders, etc. Our project involved a slightly different interaction with fear, mostly dealing with intimidating heights, requiring Klaas to jump out of a hot air balloon into a gut dropping 250 foot long rope swing thousands of feet above the ground. This style of pendulum rope swing is a rigging design that both Scott and I have perfected for many commercial productions, but the changing variable for this stunt was that the fulcrum point of the swing would be secured to a separate hot air balloon flying parallel in the sky.